NEW - Are you a visual learner? See Ultimate Puppy on Youtube.

Drop it & Take it, Leave it
Teaching the Puppy to Drop on Cue

We are going to teach our puppies to drop it when we ask, immediately followed by a sit. They must then wait until we give them the word that they can take the toy again (for this we will use the cue take it).

Select a toy that your pup likes to hold in his mouth. A thick knotted rope or a stuffed toy (especially designed for dogs) usually works best.

The toy that we play this game with should be kept in a place where it is not accessible to the dog; the only time he gets to play with it is when you bring it out and initiate the game. We do not want our puppy initiating games.

We start by making sure that we have a toy that the puppy is interested in taking in his mouth and holding on to. 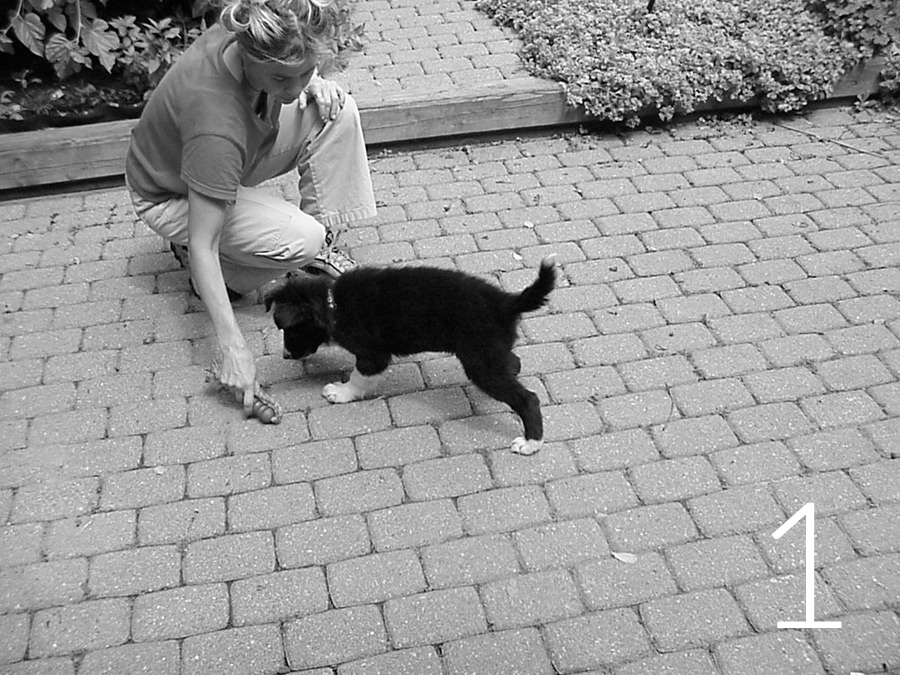 Excite the puppy to take the toy in his mouth, some puppies will do this very readily, others will take a little more coaxing. If the puppy is not too interested, put the toy on the ground and pull it along the floor and wiggle it, talk in an excited voice, saying things like “ya wanna get it!” (If the puppy is still not interested, read How to Get an Uninterested Puppy Playing With Toys) 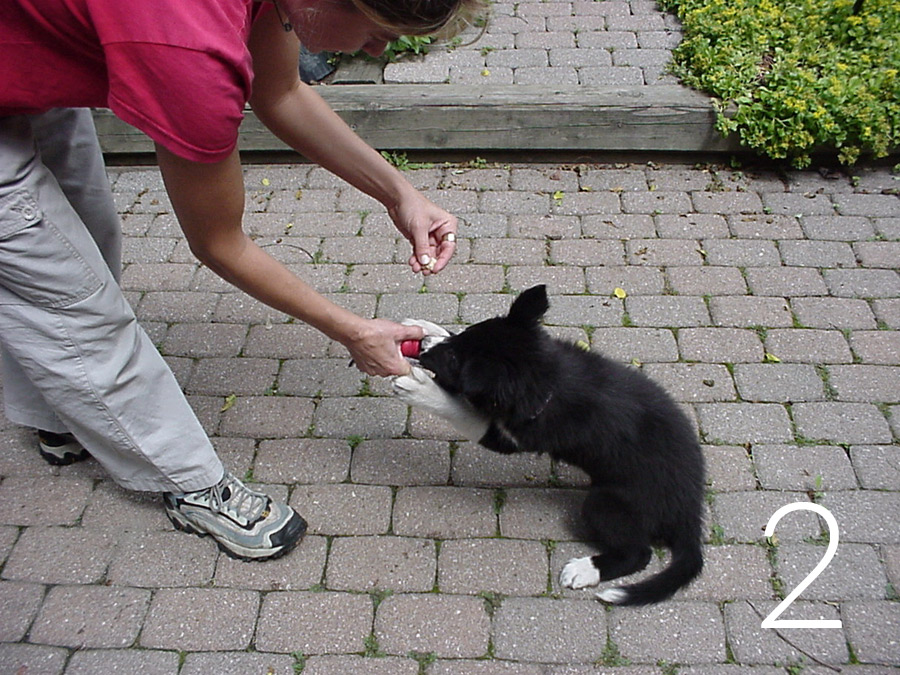 Once the puppy has taken the toy in his mouth and is holding on to it, ask him to drop it. We are teaching the drop it so don’t expect that he knows what you are talking about. You need to teach him what these words mean.
Here you have several options depending on the puppy. As you ask for the drop it, put a tiny piece of food against the puppy’s nose. As he hears the cue, he scents the food and should let go of the toy or object in his mouth. After he has let go, lure him into a sit as you ask him to sit. Once he is in the sit, praise and reward him with the treat. 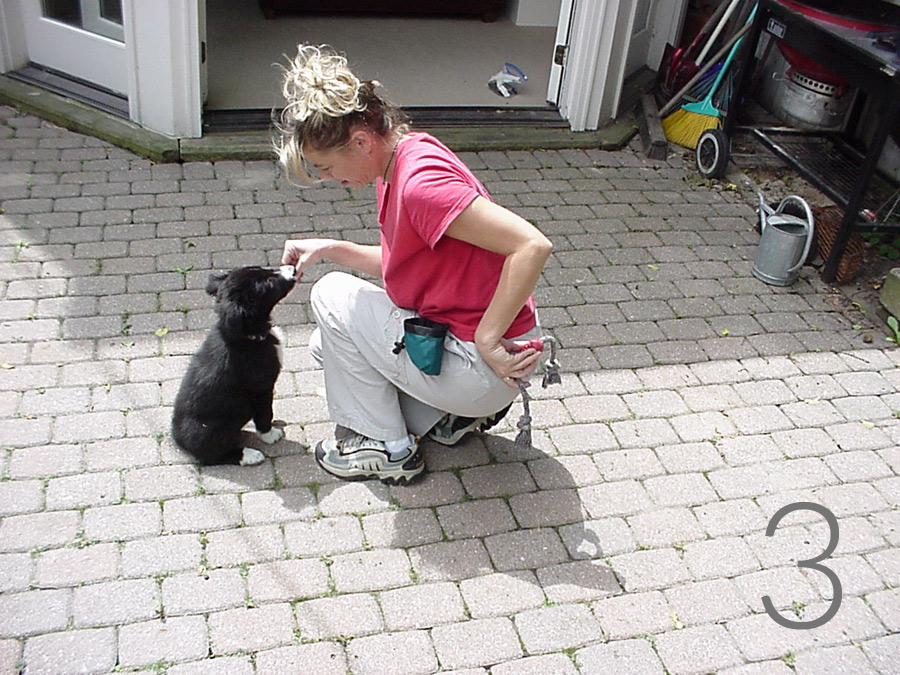 We teach the puppy to sit after we ask for the drop to prevent him from jumping up to grab the toy. This is a very important step, do not omit it.
Next you introduce the cue take it. This happens once the puppy has dropped the toy and done his sit. You start the game again by offering the toy back. The sequence goes like this; take it — drop it — sit — take it. Rinse and repeat!
You should proceed this way until you see that the puppy is readily dropping the toy. Start to fade out the treat to the nose but continue to reward the sit with a treat for a few days and then more randomly, and then not at all.

Take It, Leave It

This game conditions your dog to understand when he can take something and when he has to leave it. Depending on how old you are, you may remember a certain James Bond movie that employs this exact game. A huge piece of steak was laid down in front of two very hungry looking Doberman Pinschers and they just stared at it until the bad guy in the film says they can have it. As amazing as it appeared in the film (it was a big crowd-pleaser), it is one of the easier things to teach your dog to do! You will probably not use it in the way they did in the James Bond film, but it has some very practical everyday uses. 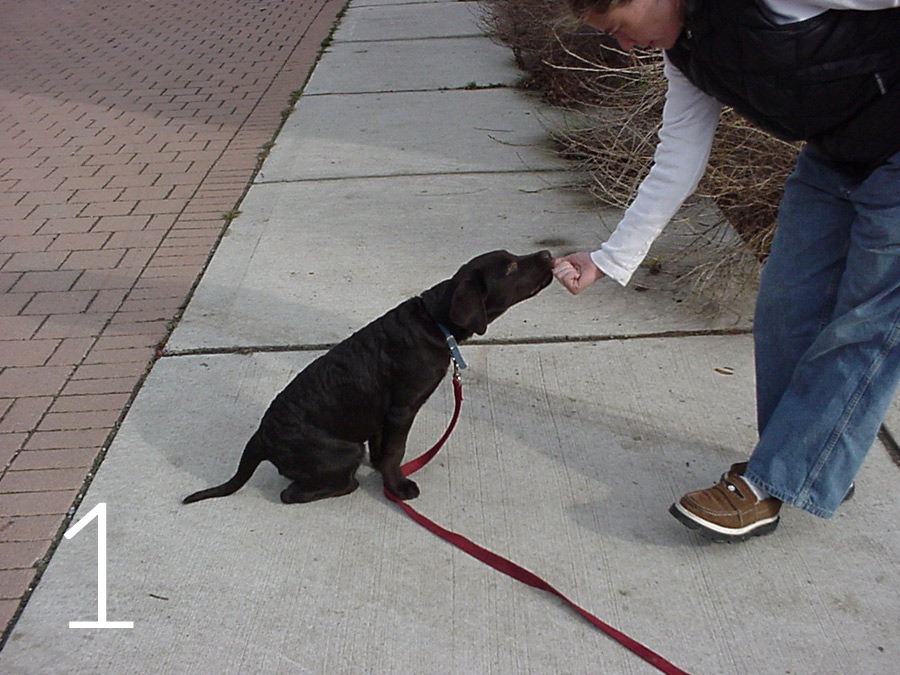 Sit or kneel down on the ground with your pup. Get his attention by showing him that you have a treat (the puppy should REALLY like the treat you have chosen for this).
To begin with, it helps to keep your hand at the puppy’s eye level, or slightly higher.
When the pup tries to reach out and get it, close your hand. Now wait for him to leave it. 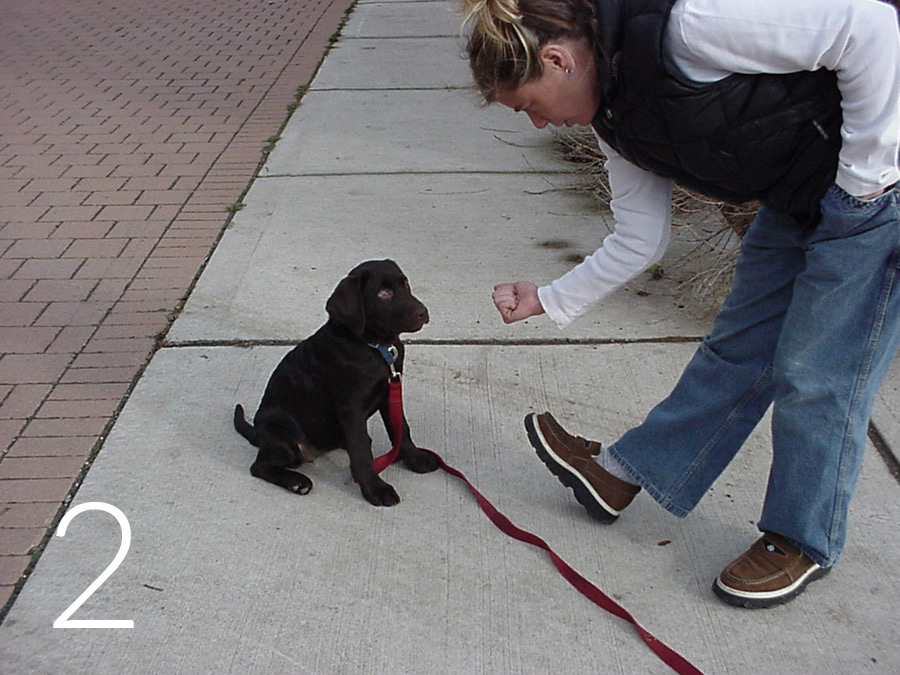 Once the puppy has backed off your hand, open it again in front him. Repeat the first steps if he tries to get the treat again. If you do this often enough, your puppy will learn that if he goes for the treat, he will not get it.
Once your puppy backs off or looks away reliably, you can insert the verbal cue “leave it”. 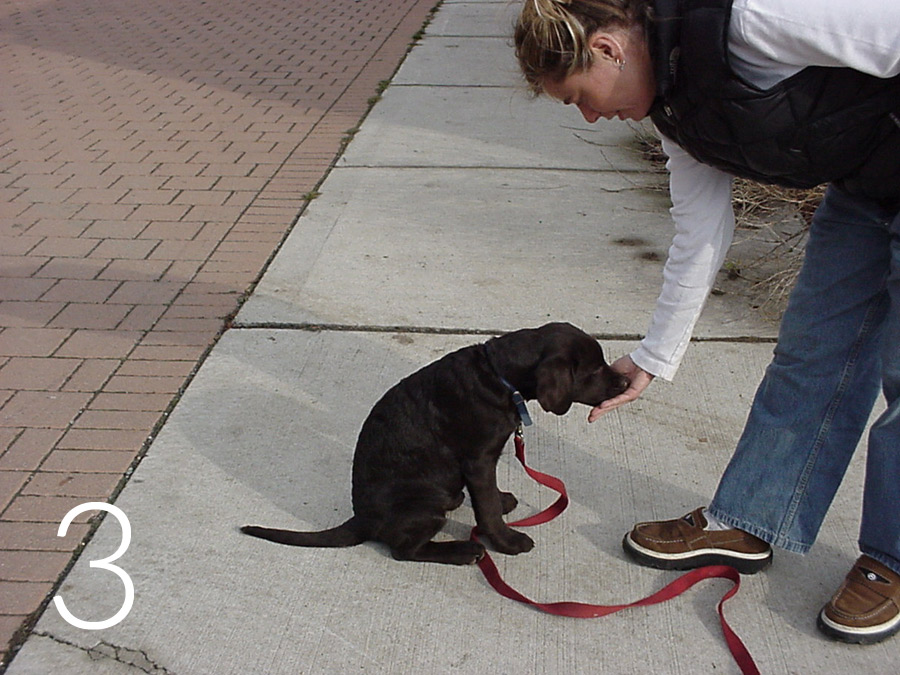 This is a great cue to employ when your dog is getting into something you don’t want them to, such as a dead fish at the beach, the snacks on the coffee table, or perhaps your child’s favorite toy.

Enter your email address to subscribe to The Puppy Journals, the Ultimate Puppy blog, and receive notifications of new posts by email.